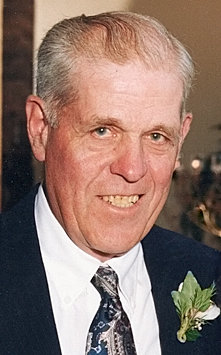 Walter A. Dengler, Jr., 95, of Davenport, formerly of Eldridge, passed away on Friday, Nov. 26, 2021, at Ridgecrest Village. Funeral service will be held on Monday, Dec. 6, at 11 a.m., at Weerts Funeral Home. Visitation will be from 9:30 a.m. until the time of service. In lieu of flowers, memorials in Walter’s name may be made to Ridgecrest, Hospice Compassus, or the Eldridge Volunteer Fire Department.

Walter was born on the family farm in rural Scott County, Iowa, on Feb. 5, 1926, to Walter and Mary (Keppy) Dengler. He attended country school through eighth grade and graduated from Davenport Central High School in 1943. Following high school, he went to work as a farm hand. On June 25, 1947, Walter was united in marriage to Elaine Clausen; she preceded him in death in 2000. In 2002, he married Phyllis Gooch; she preceded him in death in 2019.

Walter continued the farming tradition of his family. In 1948, he started his own farm with milking Guernsey cows and raising hogs. He was also a very successful corn and soybean producer, winning many local and state production contests. Walter also enjoyed spending time away from the farm and could often be founding bowling, golfing or dancing.

Fond memories and expressions of sympathy may be left to the family by visiting his obituary at www.weertsfh.com.