State Sen. Zach Wahls: 'We're going to have a lot to say' 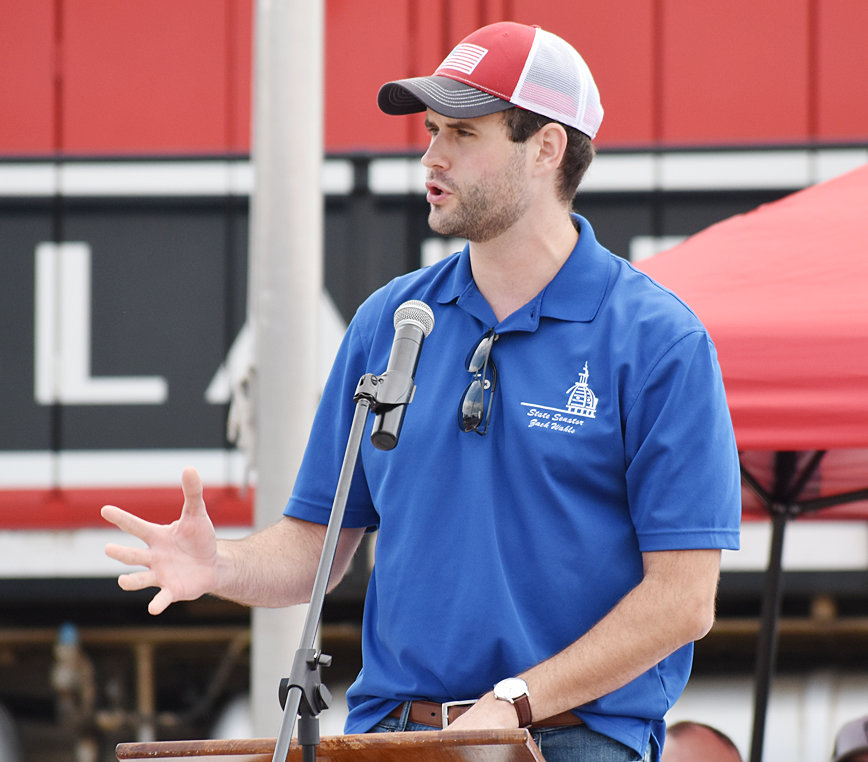 State Sen. Zach Wahls was recently elected as the new Democratic Leader of the Iowa Senate. At 29, he may be the youngest to be elected to the leadership position. Wahls represents District 37, which includes Wilton and portions of Muscatine, Cedar and Johnson counties.
Derek Sawvell 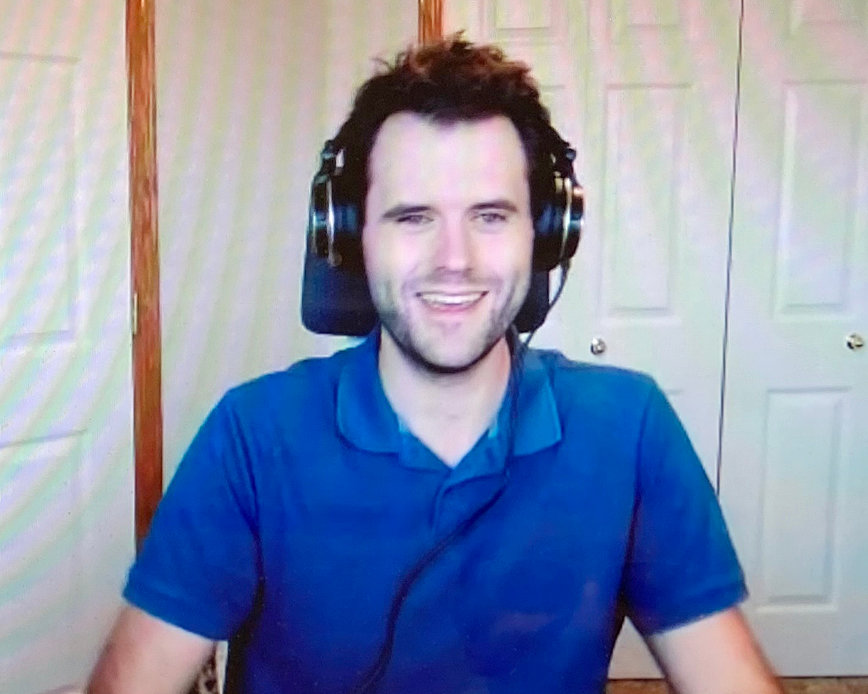 Zach Wahls shown during his first interview since being named Democratic Speaker of the Iowa Senate. The meeting was held with the Wilton-Durant Advocate News editor Derek Sawvell via Zoom.
Previous Next
Posted Wednesday, December 2, 2020 3:56 pm
Derek Sawvell, AN Editor

He may be just 29 years old, but Zach Wahls, the new Democratic Leader of the Iowa Senate, is no stranger to the political spotlight. It was a decade ago when Wahls’ meteoric rise in the Iowa political sphere began.

Currently serving in his first term, Wahls was elected to the Iowa Senate in 2018 on the Democratic ticket. His Senate district (District 37) includes Wilton and portions of Muscatine, Johnson and Cedar counties.

He takes the Democratic leadership role from Sen. Janet Petersen, who chose not to run again for the position. “Word got out around Nov. 11 that she was not going to run for another term,” said Wahls in his first interview since being elected to the position.

“I was willing to throw my hat into the ring. Anyone who knows my story, and me, knows I like to be in these positions. Just like in sports, I like to have the ball. But this is a team sport and you have to pass the ball too,” Wahls continued.

Prior to Petersen’s short stint, longtime Iowa Senator Mike Gronstal served as the Senate’s Democratic Leader from 1997-2017. Wahls said he contacted Gronstal, who gave him an interesting piece of advice: “He said on any given day you can walk into a caucus meeting and be overthrown. You have to work with your staff and stay on point,” Wahls said.

At 29, Wahls may be the youngest ever to be elected to the position. “I don’t know for sure if I’m the youngest, or (first) first-term leader. No one has come up with anyone as young, or halfway through their first term. I was not trying to oust Janet. The opportunity was just there. I was already making calls to be an assistant leader. I was ready to step up for a new responsibility.”

When Petersen made her decision, Wahls started getting calls — Perhaps the next leader could be him? He’s in a unique position. He may be new to the state political scene from an elected perspective. But his roots at the Iowa Capitol run deep, resulting in a following the likes of which most career politicians at the state level don’t reach. To date, he has nearly 49,000 Twitter followers.

His political story dates back to 2011, when he addressed the state Legislature as a 19-year old college student. Marriage equality was the hot topic then, and he addressed the state with regard to his upbringing by two mothers in a same-sex relationship, and marriage equality — as Iowa had been thrust into the national spotlight by legalizing same sex marriage in 2009.

“That wasn’t a fight we picked. It (same sex marriage) was legal in 2009. In 2011, Republicans battled it. For the people of Iowa, it was settled,” said Wahls. “I answered the call of duty. I was a college student who defended my family … I remember Republicans using my family as an example. I was trying to speak up for the people who weren’t at the table. I’m an Eagle Scout, and it was about defending my family and our dignity. There is a misnomer that Democrats always talk social issues. Republicans picked that fight. The Democrats protected those in harm’s way.”

His speech was videotaped, and it quickly went viral. “I had a choice to make as a college student. Go back to what I was doing (an engineering student at the University of Iowa) or keep fighting.”

Zach chose to keep fighting, and he quickly began canvassing the state, telling his story.

Then came the book deal, where Wahls said he wrote a book using the values he learned in Boy Scouts as a guide. The book was titled “My Two Moms: Lessons of Love, Strength, and What Makes a Family.” Published in 2012, it spent 2-3 weeks on the extended New York Times best seller list. Tens of thousands of copies of the book have been sold.

It also helped lead to Wahls helping found Scouts for Equality, a nonprofit organization with the following vision statement: “The vision of Scouts for Equality is of an inclusive, vibrant and strong Boy Scouts of America in which members, leaders, parents, volunteers and supporters treat each other with mutual respect and acknowledge the inherent worth and dignity of all people.”

“It’s like the Spider Man quote, ‘With great power comes great responsibility.’ There’s no magic wand to make a story go viral. I got lucky. I had a platform for my voice. I was the right person at the right place and time. A lot was chance, but I had a responsibility to pay it forward,” Wahls said.

Six years later, Wahls saw his political opening with the retirement of longtime Democratic state Senator Bob Dvorsky. He ran in a 4-way primary for the seat, won the primary handily, and won the Senate seat without a Republican challenger.

Now Wahls is preparing to begin the 2021 Legislative Session as the Senate’s top ranking Democrat. His primary focus is the COVID-19 pandemic, which halted the 2020 session and may inhibit the upcoming session from starting.

“COVID is at the top of the agenda, making sure to slow the spread. We’ve got to defeat it. We need a safe, effective and free vaccine, and that is closer than some think,” said Wahls. ‘I’m cautiously optimistic our frontline workers could get vaccinated by the end of the year. The previous record for a vaccine is four years. We’ve demolished that. COVID-19 is terrible; it has killed thousands of people. And Republican leadership has done a bad job. I’m making a call for a COVID commission. We need to learn from our mistakes, and see how (federal) COVID dollars are being used. This won’t be our last pandemic. We need to be ready.”

Another hurdle — the 2020 election and the fact that President Trump, Sen. Joni Ernst, and other Republicans won up and down state ballots. “It’s been a heck of a year. It felt like a decade. The election made it clear that, even though I disagree with Trump on several issues, he has pull with several Iowans. A lot aren’t regular voters, and some aren’t involved in the political process. That’s a credit to him,” said Wahls. “Folks who voted for him voted for Trump’s Republican Party, that’s not the ‘normal’ Republican Party. Was it about Republicans or Trump? My hypothesis is it was about Trump and his views, not (the party) … I mean the state went from Obama, Obama to Trump, Trump.”

Given the political climate, and the fact that Republicans still hold control in the governor’s office, state House and Senate, Wahls knows there’s an uphill climb when the Legislature gets back in session. “We need to take opportunities to work with Republicans whenever we can. I’m reminded of the phrase, ‘The majority gets its way, but the minority gets its say.’ We’re going to have a lot to say.”

When asked if he had bigger political aspirations within the state or beyond, Wahls said that he’s focused on continuing to represent the people in his district. “The reason I took this job is we need new leaders and we have a lot of work to do. I’m committing to serving my term as leader for two years and at this point, I assume I’ll run for re-election (in Senate District 37).

“I’m always going to be the guy who gave that speech. I will try to set a clear vision on where to go and work with Republicans when we can. But we need to elect a Democratic majority to the Iowa Senate. Everything I do will be focused on executing that.”

In a previous release about Wahls’ election as Democratic Leader of the Senate, Sen. Wahls said the following:

“I am honored to have been elected by my colleagues to serve as the Iowa Senate’s Democratic Leader. As the Senator representing Cedar, Johnson, and Muscatine counties, my district spans urban, suburban, small town, and rural Iowa. I see firsthand the growing gap between the wealthiest few and the majority of Iowans across our state. A rising cost of living with stagnant wages meant that too many Iowa families were struggling — and that was before the coronavirus pandemic gripped our state.

“Senate Democrats will be focused on defeating the coronavirus with decisive action supporting essential workers, protecting Iowa families, and assisting small businesses. The impact of this pandemic on Iowa’s economy, public health, and especially our senior citizens, cannot be overstated. We must get our state back on a path to complete economic recovery.”