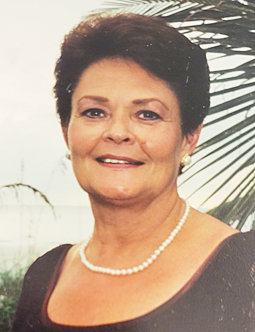 Sandra Kay (Sogn) McCoy Larson, 79, died Tuesday, Sept. 7, 2021, surrounded by family at her daughter’s home in Durant, Iowa. Per her wishes, cremation rites have been accorded and there will be no services.

Sandra was born Dec. 4, 1941, in Gregory, South Dakota, to Wilmer and Vivian (Hanson) Sogn. She was raised in Sioux City and graduated in January of 1960, from Central High School (aka Castle on the Hill). She then attended St. Ambrose University in Davenport, Iowa.

Sandra was united in marriage to Jerry E. McCoy on Aug. 15, 1961 and they welcomed two children, Kristine and Kevin. She was later married to David C. Larson on Sept. 6, 1998 (he died March 4, 2014). Sandra worked various jobs in the banking industry over the years, retiring from Fifth Third Bank. She spent time in multiple states including, California, Texas and settling in Naples, Florida prior to her return to Iowa.

She was a member of a Lutheran Church in each city that she had lived. She most enjoyed spending time with her family, especially her grandchildren and great-grandchildren.