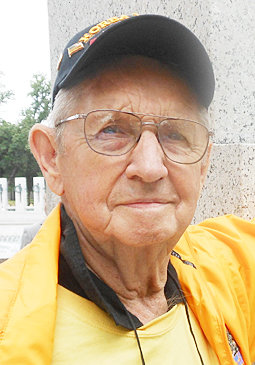 In lieu of flowers, memorial contributions may be made to Multiple Sclerosis Association of America. Condolences may be left at www.bentleyfuneralhome.com.

James was born on June 21, 1929, the son of Kenneth and Glendoris (Ferrel) Whiteley in Centerville, Iowa. He graduated from Wilton High School with the class of 1947. After graduation, Jim owned a painting business. He proudly served his country in the United States Army during the Korean War, where he received the Bronze Star and Purple Heart. He married Catherine “Kay” Wallace on Feb. 21, 1954 in Hot Springs, Arkansas.

Jim operated the Western Auto Store in Wilton from 1954-1976. He later worked for Louis Rich Foods in West Liberty, retiring in 1992. He served as a Wilton volunteer fireman for more than 20 years, and was a member of the Wilton Masonic Lodge. He enjoyed spending time in his garage, tinkering and traveling. Most of all, Jim loved spending time with his grandchildren.

He was preceded in death by his brother, Gene Whiteley; and one son in-law, Richard “Dick” Nelson.