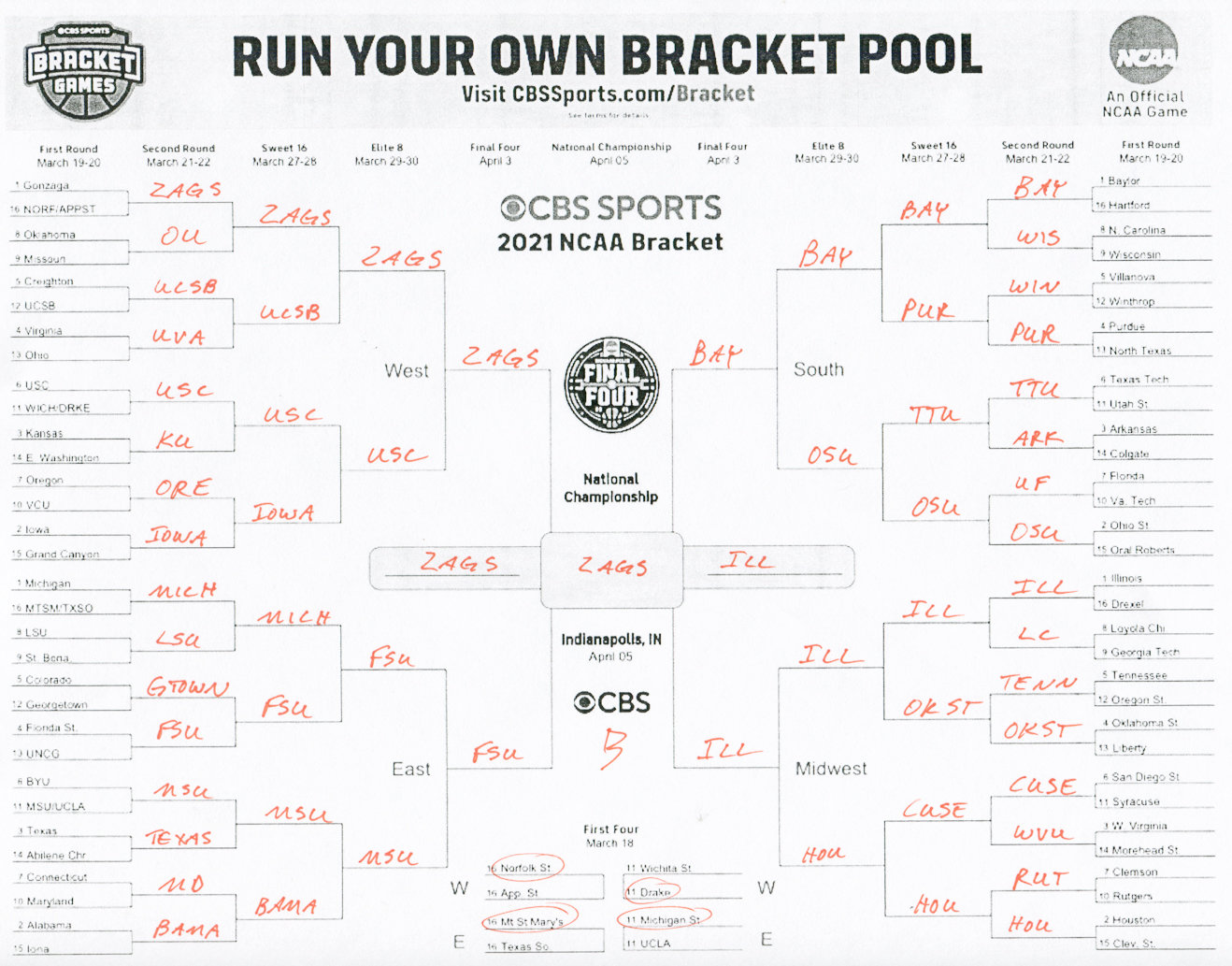 It’s been two years. Patiently or impatiently, I, along with the rest of the nation, was waiting to hear the iconic CBS music Sunday evening to start the NCAA tournament selection show.

It was around this time last year that the country started shutting down amid the onset of the COVID-19 pandemic. One of the first nation-wide events that went away, letting us know that the threat of this virus was real, was the cancellation of the NCAA tournament — the billion dollar cash cow of the NCAA.

A year later, we’re still battling to open businesses, get folks vaccinated, and get sports leagues and community events back on their feet as the nation tries to navigate toward a new normal.

And while the bracket is out, there’s certainly nothing set in stone, as some teams currently in the field of 68 are dealing with COVID-19 issues. Games usually slated for Thursday were pushed to Saturday. Kansas and Virginia, both in the same region, had to withdraw from their conference tournaments due to COVID-19 cases.

Players are quarantining in Indiana, where the entire tournament will be played (mostly in Indianapolis). They are being tested every day. A group of teams have been selected as alternates in case teams have to pull out by Tuesday night. If a team goes out after Tuesday, there will be a forfeit rather than a replacement team.

Top on the alternate list is Louisville, an ACC team that was forced to miss several days due to COVID-19 earlier this season.

The point is a lot can happen from now until April 5, when the national championship game is supposed to be played.

For those of us who are Big Ten fans, we were spoiled with perhaps the best men’s college basketball season ever. Sadly, no fans were in the stands to see several top 10 teams battle night in and night out this season.

Iowa was one of those teams, ranked No. 5 to start the season; it’s highest preseason rank ever. The Hawkeyes have stayed in or around the top 10 all year, and finished third in the most competitive Big Ten regular season ever.

But here we are. Megan’s Hawkeyes were a No. 2 seed when she won National Player of the year, and they made the Elite 8. Garza’s Hawks are a No. 2 seed, and I see their run flirting with the Elite 8 as well. It was a raw deal to see them in the same region as Gonzaga, a mid major that has become a national power. The Bulldogs are for real, and Iowa knows it, being beaten handily by Gonzaga earlier this season on a neutral court in South Dakota.

Gonzaga comes into the field undefeated, and will try to become the first team to finish a perfect season with a national title since Indiana in 1976. Only seven teams have finished undefeated and won the title — four of which were UCLA teams.

To say that comes with pressure is an understatement, but this Gonzaga team can do it. It would be just the second mid major to do it — San Francisco went perfect in 1956 with a guy named Bill Russell at center.

Illinois comes in the hottest team in the country. I love their chances to make a deep run. I love Baylor’s guard play. I also liked Michigan’s discipline, but with the foot injury to Isaiah Livers, unfortunately I think the Wolverines’ Final Four chances will sit on the bench with him. I will pick this tournament assuming he doesn’t play. If he were to come in healthy, I’d write Michigan into the Final Four in ink. That region — the East — is the most volatile to me thanks in part to that key injury.

My other favorite Big Ten team, Michigan State, got a raw deal having to play in one of the last four in games. Even as a No. 11 seed, I see Sparty making a run. Perhaps I’m thinking with my heart instead of my head. But that’s what March madness is all about.

The pundits will tell you that in a volatile season like this, more upsets will happen. I’m not so sure. I think the top eight seeds — four of which are Big Ten teams — are really good. I won’t be surprised if by the Sweet 16 and beyond, things don’t look a bit “chalk.”

As I’ve continued to do since 2009, I’m printing my bracket for all to mock. I’m taking Gonzaga to shock the world and go undefeated during a pandemic. Although my heart will be with Illinois should the Illini get to the title game as I’ve predicted.