Gone too soon, yet Treye was wise beyond his years 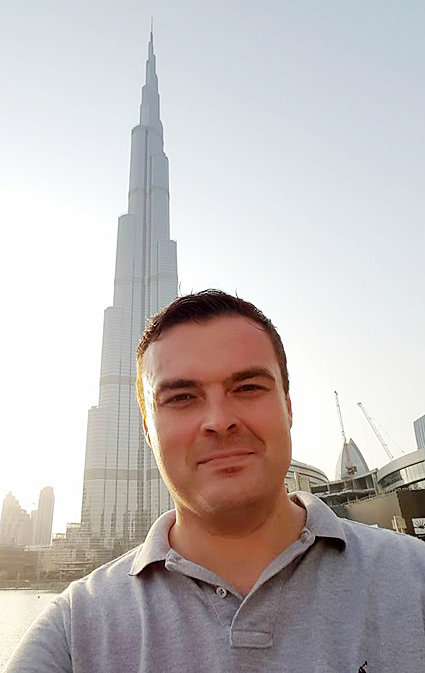 Wilton grad Treye Beinke, 39, was a world traveler, as shown above in Dubai. He taught all around the world, including China and Saudi Arabia. Beinke's overseas teaching was chronicled in the Advocate News in 2016. He died Feb. 25 in Chicago. His obituary can be viewed on p. 6.
AN file photo
Posted Wednesday, March 3, 2021 2:49 pm
Derek Sawvell, AN Editor

We were shocked and saddened this week upon learning of the death of Treye Beinke, a Wilton High School graduate from the class of 1999.

I was immediately reminded of a story we did on Beinke in late August of 2016, when we told of his world travels that allowed him to teach around the globe.

At the time, Treye was living and teaching in Saudi Arabia, where he was the head of secondary mathematics at an all-boys school.

The gig allowed Beinke to expand his horizons the likes of which most of us small-town Iowa folk will never know. At the time that former staff member Layce DeLong did the extensive piece on Treye, he had been to Thailand, Italy, France, England, The Czech Republic, Germany, Austria, Bahrain, and I’m sure the list just grew and grew.

He was a citizen of the world. A very thoughtful man who could hit you with both knowledge and culture. He had taught in Texas for years before going overseas. He also taught in Beijing, China before coming back to the U.S., where he was teaching in Chicago most recently.

My father Stan went to school with Treye’s uncle, Tom Beinke. While visiting my parents late last week, my dad came in the house and said he just had the strangest call from Tom, telling him of Treye’s death.

I didn’t want to believe it. There’s a part of me that still doesn’t. Ironically, upon getting back to my office, I received his obituary. I suppose hearing the news from my father minutes prior softened the blow, yet it was still the kind of shock I only get every once in awhile.

At the time I write this, I don’t know the cause of Treye’s death. Perhaps I never will, although I’m sure by now his family members have learned more.

Interestingly enough, when we told Treye’s story in 2016, it was one of the longest stories Layce DeLong ever written for us. Yes, she and Treye were also friends outside of work. And yes, I admittedly thought it was too long when the piece was first completed.

Yet as I read it, I couldn’t put it down. After finishing it, I told Layce that it was long, but I hung on every word. I felt many of our readers would (and did) too.

We asked Treye about the impact of living overseas. He spoke of living in a country in the Middle East — what it was like navigating the heavy religious components, coupled with the stigma of it being the Middle East from a bit of a militaristic and/or cultural perspective.

He provided a wonderful quote that we printed in its entirety. I’m going to reprint it now:

“I definitely have a different perspective from this experience that I could not have fully appreciated from reading a book or watching a show, or even visiting for a week. Living in another country has opened my eyes and caused me to throw out the idea that America is the center of the universe and all other countries are somewhat inferior.

I still am a very proud American and believe the United States is the greatest country in the world, but I also realize there is so much to see and learn about and value about the other people living in other countries. The things I have found that really make Americans and other societies different are very small and trivial things. Certain holidays or celebrations, customs, the ways in which people talk or interact with each other. But there are definitely more similarities than differences and for the most part my students act the same as they did in America. Kids are kids no matter where they are.”

We lost you too soon Treye, but clearly you were wise beyond your years. We could all learn a lot from you. Rest in peace.