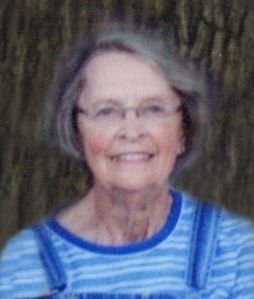 A private family service will be held in Durant Cemetery. Memorials may be directed to Faith Lutheran Church in Eldridge. Online condolences may be left at www.bentleyfuneralhome.com.

Gloria was born in Iowa City, on June 1, 1934, the daughter of Arnold "Shorty" and Valborg "Bobbie" (Jensen) Schukar. She graduated from Durant High School with the Class of 1952. Gloria married Lawrence Hamann on Feb. 14, 1953 in Davenport. Lawrence died on Dec. 19, 2015 in Bettendorf.

Gloria farmed alongside her husband, Larry, on the family farm in rural Eldridge. She worked for Davenport Tool Company in Eldridge. She later worked in the Print Shop for the North Scott Community School District before retiring.

She was a longtime member of Faith Lutheran Church in Eldridge. Gloria loved cooking for her family and supper was always ready at 5:30 sharp! She enjoyed crafting, especially sewing and painting. Gloria never missed attending her children's and grandchildren's school events.

Gloria will be dearly missed by her three daughters, JoDee (Scott Petersen) Sorgenfrey and Karen (Stan) Price both of Durant, and Merri (David) Leigh of Long Grove, Iowa as well as four sons, Jay (Brenda) Hamann, Andrew (Wendy) Hamann, Wade (Linda) Hamann and Ward (Carol) Hamann all of Eldridge, Iowa along with 20 grandchildren and 37 great grandchildren.

Gloria was preceded in death by her husband, Lawrence as well as a son, Michael Hamann and an infant son, Jamie Hamann, her daughter, Dawn Schneckloth and two grandchildren, Dane Schneckloth and Jarin Satterly along with two sisters, Doreen Orr and Karen "Tinker" Brus.