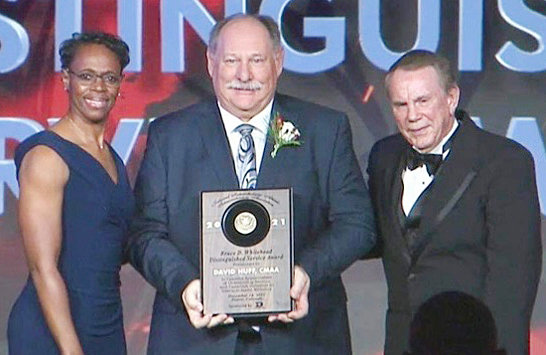 Editor’s note: The following story is being reprinted with permission of the Adair County Free Press. Dave Huff is a former athletic director at Wilton High School.

Huff said he knew he was nominated for the award because each state selects a nominee.

“You have paperwork you fill out [once you’re nominated] and I thought that was as far as it’d go,” Huff said. “They give about 10 to 12 every year, and in no way did I think I would be one of those 10 to 12 people who would receive that ward, so it was very humbling.”

Huff retired from Nodaway Valley at the end of the 2014-15 school year, but he remains active on the state board for the Iowa High School Athletic Association as its Historian and a national committee that helps select Hall of Fame inductees for the NIAAA.

“It’s a neat experience,” Huff said. “I’ve met a lot of people from a lot of different places and it’s been kind of fun.”

Huff said his continued involvement in retirement from athletic administration is a way to give back to the organizations he’s been a part of.

“I also think it’s a part of me giving back to help support activities programs, which I feel are fantastic for kids, giving them an opportunity to succeed and be able to reach the levels they want to reach,” Huff said. “Receiving this award was a very humbling experience. It was a fun time and it’s nice to be given an award by your peers.”

End of an era: Dohrmann to leave at end of school year