Enough is enough, let's clean up our act! 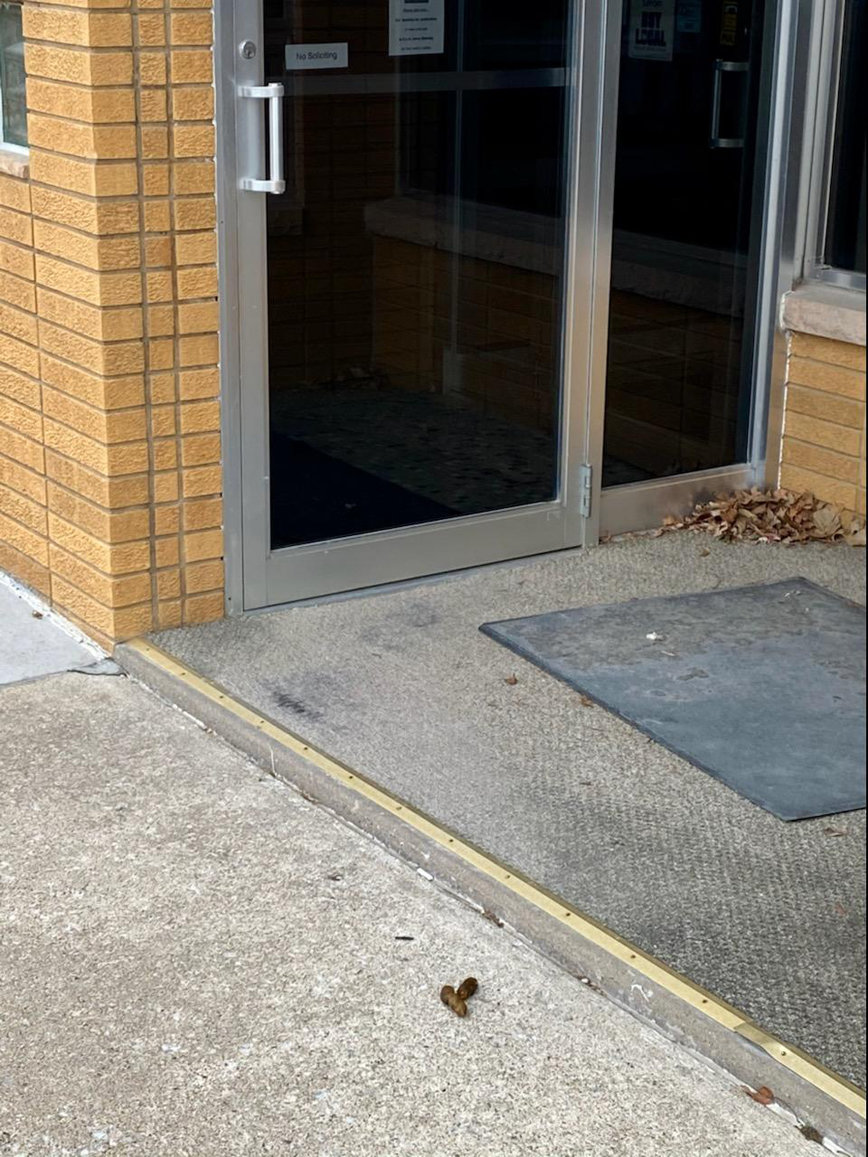 The photo above was taken in front of the Advocate News office door Dec. 18, where dog excrement can be seen on the downtown Cedar Street sidewalk.
Amber Ganzer
Posted Thursday, December 24, 2020 9:30 am
Derek Sawvell, AN Editor

In the last few years, downtown Wilton has seen several changes, all for the better. It started with a facade program, where matching funds were given to business owners who updated storefronts.

Later, we spent hundreds of thousands of dollars on a downtown revitalization project, which again focused on facades, with the emphasis on creating more of a vintage look. Time period-specific doors and windows were added to several downtown buildings. Several were also repainted.

Wilton's historic City Hall is undergoing major renovations. Long overdue, as the building was literally crumbling before our eyes. But in recent months, the interior has been remodeled, and the focus shifted to the outside, where new windows, doors, a handicap-accessible entrance, etc. have been added. A new roof was (finally) added. Progress is costly, again hundreds of thousands, but we're seeing the results.

Years of planning went into the new home of the Muscatine County Freedom Rock, which is also in downtown Wilton near the historic Wilton Depot. A dedication ceremony was held this year.

There have been two beautiful murals painted in downtown Wilton by local artists. They are quite a sight!

These are just a few of the things going on to help beautify our hub. Our downtown is a living thing, and a lot more life has been pumped into it in recent years.

And yet, instead of looking up to see the wonderful detail on the freshly painted downtown buildings; or the colorful murals; or the breathtaking Freedom Rock site; or the wonderful renovations happening at City Hall; all I can do is look down at the sidewalk with EVERY step I take.

Because walking the streets of downtown Wilton has become weaving through a land mine area of dog feces.

Last week, we arrived at our office to see what I'm showing all of you (photo included). A pile of dog excrement sitting right in front of the door to your community hub — the local newspaper. To avoid embarrassment, and literally stepping in it, one of our staff removed the waste — certainly not in her job description!

Rather than make a Facebook blast, which is what (seemingly) about 99.9 percent of people do, I immediately sent the photo to the city administrator and police chief for review.

To interject a little back story, I attend more city government and school meetings in a couple months than most do in a lifetime. Comes with the job. I take my role seriously at these meetings. I'm there to report. I'm the watchdog FOR YOU.

However, every so often I'll take off the journalist hat and put on the private citizen hat to make a comment in the public portion of meetings. No more than a couple months ago I brought the issue of pet waste in downtown Wilton up at a council meeting. The mayor, council and police were receptive.

The last time we walked into the same kind of mess, we spoke to the landlord of the building we speculate it's coming from. Photos were taken, and we were told letters were going to be sent to tenants.

We all know city employees and/or cops can't be walking the streets with "pooper scoopers" — although trust me they'd have plenty of work to do.

I received an email back from the city administrator, who said that a Facebook post would be made using the picture, with my permission. I granted it. The post said the following: "It has been brought to our attention that people are not picking up after their dogs. It is against our city ordinance to leave waste on the sidewalks or streets. If you see someone not picking up after their pet, please call City Hall or the Wilton Police Dept."

I'd make a plea to downtown dog owners to clean up after their pets, but what good would it do?

Our theory in our office is simple: During the day, when businesses are open, downtown apartment dwellers walk their dogs, carrying scoopers or bags with them for cleanup. When the sun goes down and businesses close, the fun begins. Who knows which business owner is going to walk into a surprise each day?

Enough is enough, and it's time for a change. Downtown Wilton is the only concrete jungle this town has. I once lived in a downtown apartment. Pets weren't allowed. Even if they were, I wouldn't have wanted one. Where do you take them to relieve themselves? An alley? The green space next to the Candy Kitchen, where I suspect many end up? People's yards adjacent to downtown properties?

Our downtown landlords need to rethink allowing pets. Let's be specific — dogs. When I brought it up at a council meeting, one strange thing I was told is, "maybe it's from stray cats?" I don't know about you, but I've never seen a cat "do its business" publicly or in the open in my life. Yes people living downtown feed stray cats, and that may be an issue. But that's NOT where the excrement I'm seeing comes from.

Please landlords, do the right thing. Forbid downtown renters from having pets. I understand it can mean more revenue. I understand it gives the renter the companionship we all yearn from dogs, which, if you read this space, you know no one loves dogs more than I. But we're also counting on responsibility of the owners. Sadly, we see where that gets us.

So ... watch your step. If you see something, say something. Call the police, and perhaps the landlord of the building. It's sad we have to burden our city officials with this, but this is where we are.