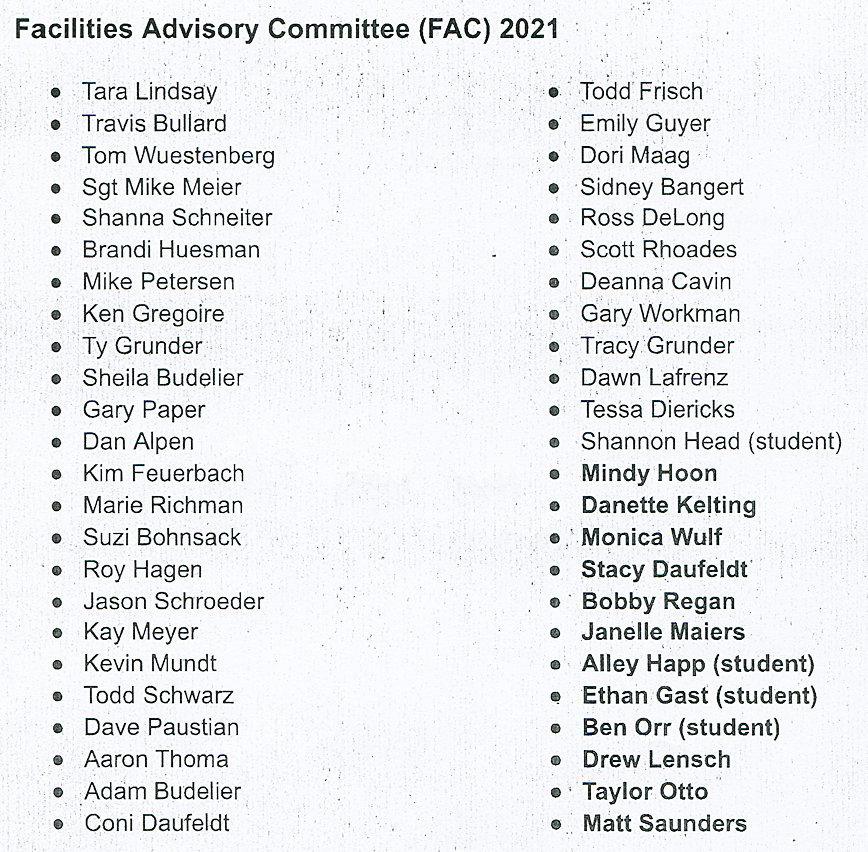 The Durant School District Facilities Advisory Committee (FAC) list presented to school board members at the Aug. 23 work session. There are 48 names on the list, and it was noted that a few more individuals had been asked to join. The names on the right side (bold) were the most recent adds at the work session. Editor's note: The list above is printed as is from the school, with names spelled as presented by the district.
Posted Wednesday, September 1, 2021 6:02 pm
Derek Sawvell, AN Editor

The Durant School District is finalizing its 2021Facility Advisory Committee (FAC) it was asked to assemble by OPN Architects of Cedar Rapids, the firm reviewing all of Durant’s facilities, which could also include planning another future bond project.

As previously approved in June, the school district has hired OPN with a lump sum fee of $46,600 for scope of work and long-range planning, and $5,300 for pre-bond services. The FAC will help OPN in assessing Durant facilities while working toward another possible bond referendum.

OPN has already done extensive work with the Durant district, assessing structural components of the buildings, which led to the 2-year roof replacement project the district finished this summer.

At the Aug. 23 board work session, a list of 48 names (pictured) was reviewed, consisting of people who had been reached and confirmed their interest in being on the FAC. Board President Julie Rivera also referenced a list of six names — Gale Huston, Hailey Houk, Tony Krebs, Claire Paulson, Tyler Brummel and Adam Belitz — who had also been contacted but had either not responded or committed.

The first FAC meeting with OPN will be Sept. 15 at 6 p.m. in the Durant school cafeteria. The meeting is not open to the public.

Superintendent Joe Burnett asked the board how it wanted the district to communicate the initial meting and information with FAC members. It was decided that a letter will be mailed. “I’m really excited to get this kicked off,” said Burnett. “We’re trying to be aggressive in making our facilities more updated and inviting.”

* Maintenance Director Tom Wuestenberg provided a sheet of updates to the board, for continued summer work prior to the start of school Aug. 25, including new aluminum railings coming for the high school entrance; emergency lighting and new concession stand each being 95 percent complete; new kitchen steamer and elementary entrance complete, etc.

* Burnett noted that Elementary Principal Rebecca Stineman had been out of the district for 10 days as she contracted COVID-19. She had been previously vaccinated, and was going to be out of quarantine by the first day of school.

* Board President Rivera said moving forward she’d like to have printed notes from administrators prior to board meetings.

Board members Rivera, Katy Oberlander, Tara Lindsay, Carla Whitlock and Travis Bullard were present. The next regular meeting will be Sept. 13 at 5:30 p.m.