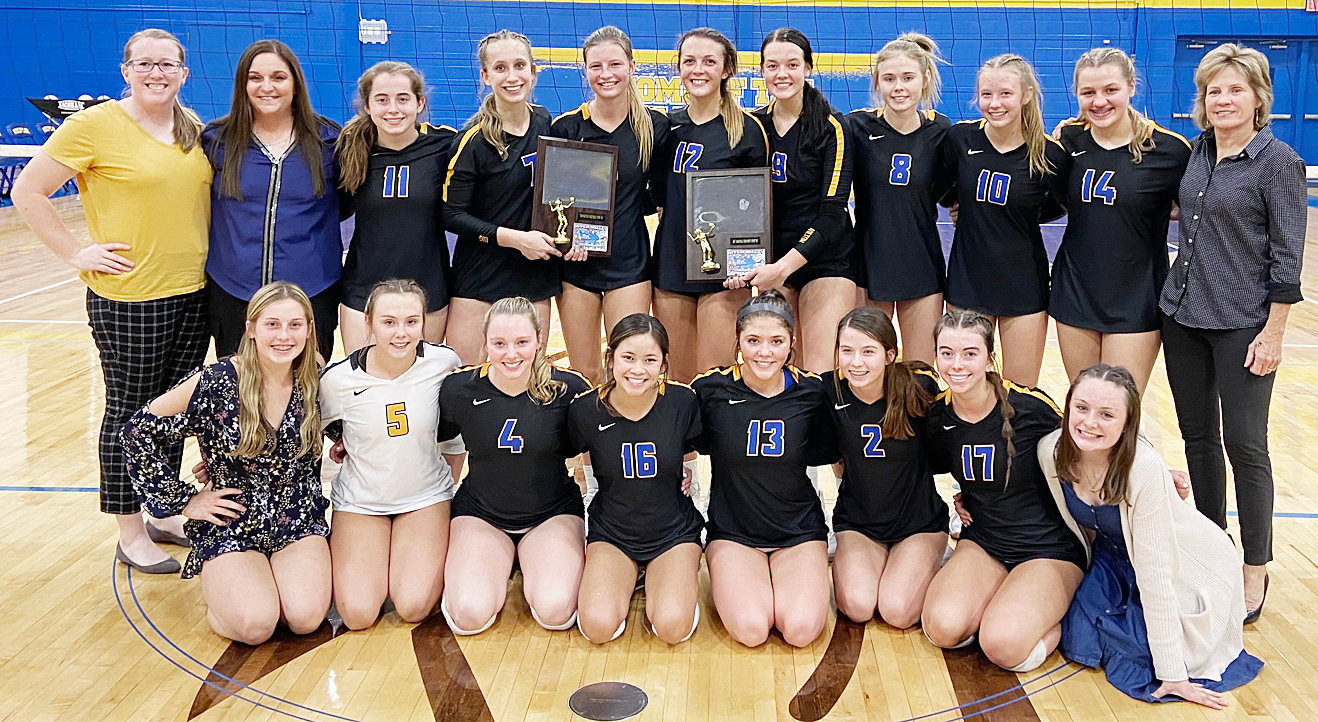 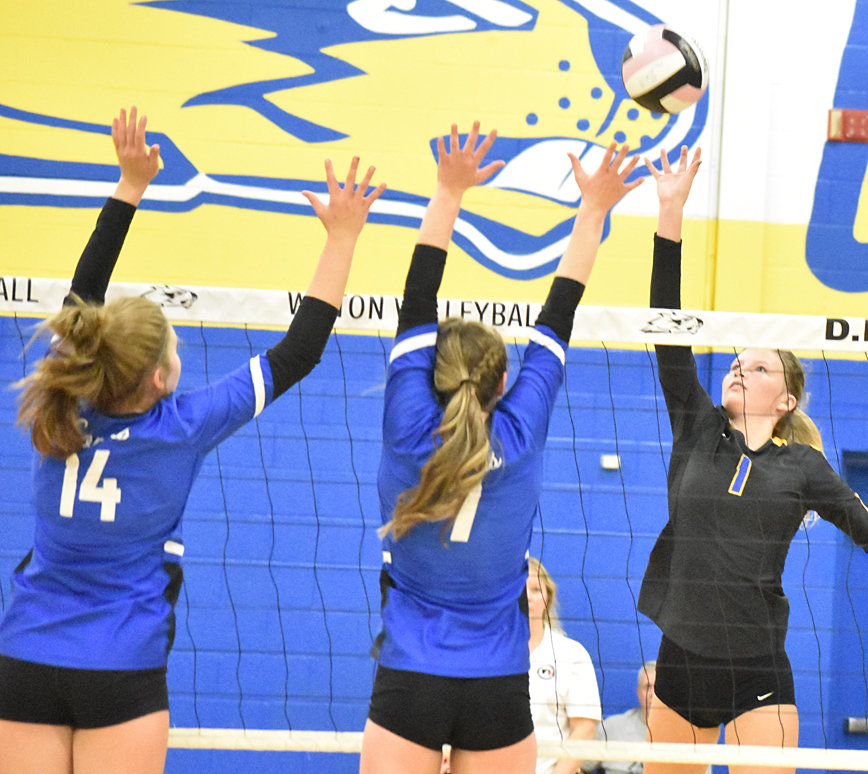 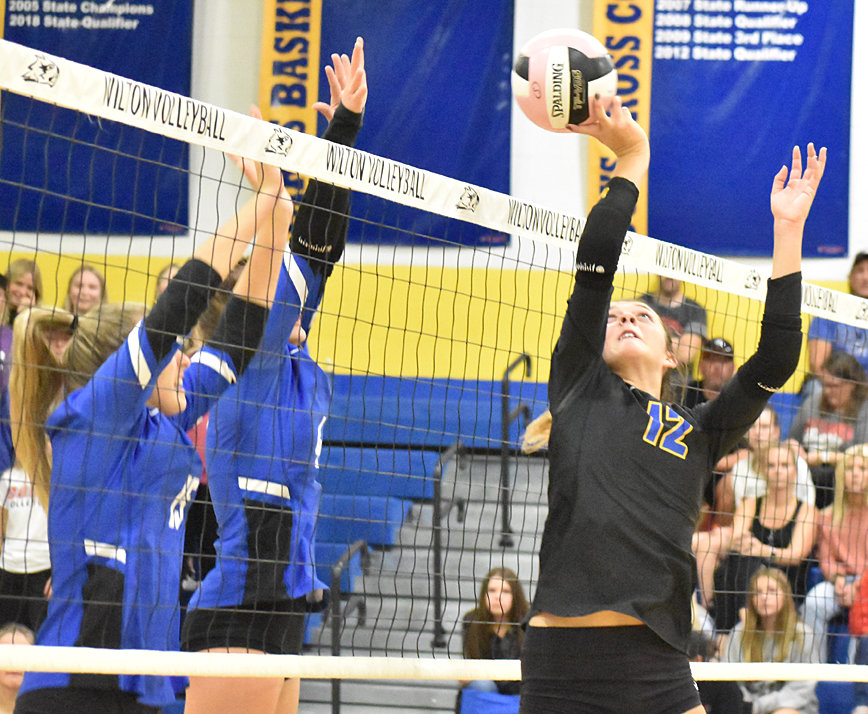 Ella Caffery looks to set the ball over the net against West Liberty.
Derek Sawvell 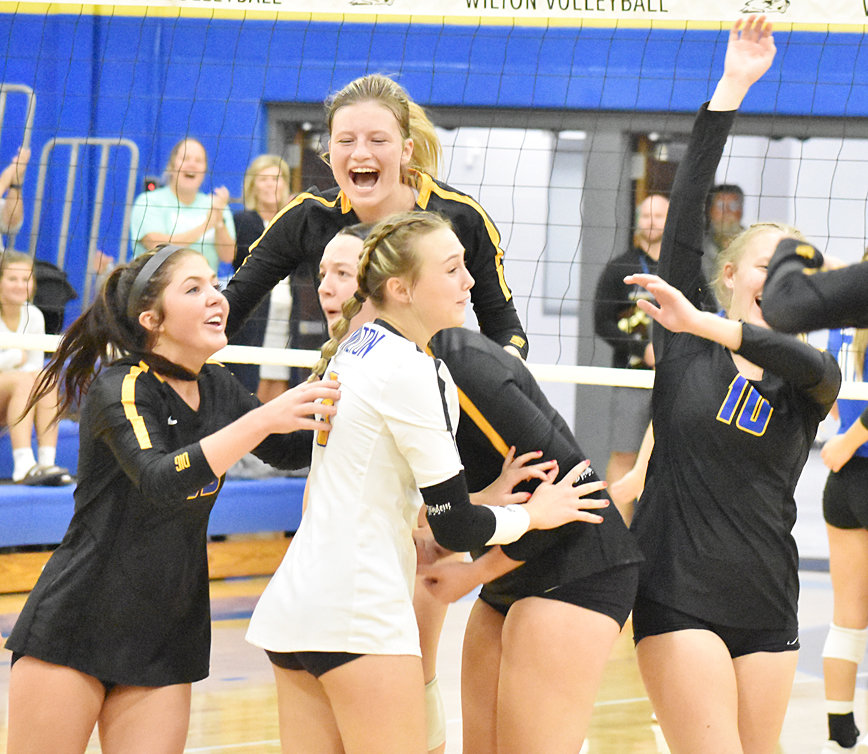 The Wilton volleyball team began its route through the River Valley Conference tournament with two dominant wins at home Oct. 12.

Carly Puffer had 21 kills on the night for Wilton, as Kelsey Drake added 13. Ella Caffery had 44 assists.

It seemed a bit of a foregone conclusion that the Beavers would meet rival West Liberty in the tournament finals. Yet both had to win quarterfinal and semifinal matches to get there. Both the Comets and Beavers swept their way to the RVC finals.

Wilton defeated Tipton in the quarters 21-6, 21-6. It was the last time in her career that Carly Puffer would face her former team. Puffer transferred to Wilton prior to last season. She was dominant against the Tigers with nine kills, three blocks and four digs. Kelsey Drake had six kills and seven digs.

“I was anxious. I thought about it the whole day,” said Puffer about playing her old team. “We played our game against them and stayed consistent. I had the fire. I was ready to go. After that first set I thought, ‘This is going to be a good night.’”

In the semifinals, the Beavers swept West Branch 25-14, 25-10. Drake had 10 kills to lead Wilton, while Puffer added eight. Ella Caffery had 21 assists. Drake had seven digs and Puffer had six.

The court was rearranged for the finals, converted from two courts to one in preparation for the match between the top two seeds — Class 2A No. 2 Wilton and Class 3A No. 4 West Liberty.

West Liberty used strong serving to keep Wilton on its heels in set one. An early 5-0 Comet run, followed by a 6-0 run later gave all the cushion needed as West Liberty soared to a 25-19 win.

“Our energy was not up for set one. But we fixed our defense and passing, and found shots on the line,” said Puffer.

The teams were playing just best-of-three. Wilton coach Brenda Grunder took her squad to the locker room. They came back to the court and flipped the script on the serving. While holding a slim 8-7 lead in set two, the Beavers went on a 10-0 run with Alexa Garvin on serve, breaking the game open en route to a 25-13 win to level the match.

“It came down to serve-receive, and who’s going to be in system more,” said Drake. “They took us out of our rhythm, but we knew the only thing we had to fix was serve-receive.”

The final set was like a prize fight, with each team trading blows. Macy Daufeldt led West Liberty with big swings all night. She continued early in the third, using four kills to get to the Comets to a 6-3 lead. Wilton weathered the storm and, as Daufeldt made her way to the back row, began coming back. Back-to-back points from Puffer and Garvin helped the Beavers to an 8-7 advantage.

Tied 12-12, Drake converted on two straight plays to help Wilton to a 14-12 lead. Caffery then fed Puffer two straight balls. The first was hit out; the second was a strong kill to give Wilton a 15-13 win to take the RVC title.

“It was a close, good match. I felt like we had it. We stayed aggressive,” said Puffer.

“Our motivation was we were runner-up three years in a row so we wanted to come out on top,” said Drake. “This is another milestone reached, but great to do it as a team. We’ve had a lot of individual milestones, but for it to be a team one is special.”

Drake had 10 kills in the championship match. Puffer had eight. Caffery had 21 assists. Drake had seven digs and Puffer had six.

“Our defense stepped up in the second and third sets. We got tight and had to find ourselves again. This helped us grow,” said coach Grunder.