Are the new poles along Fifth Street permanent? 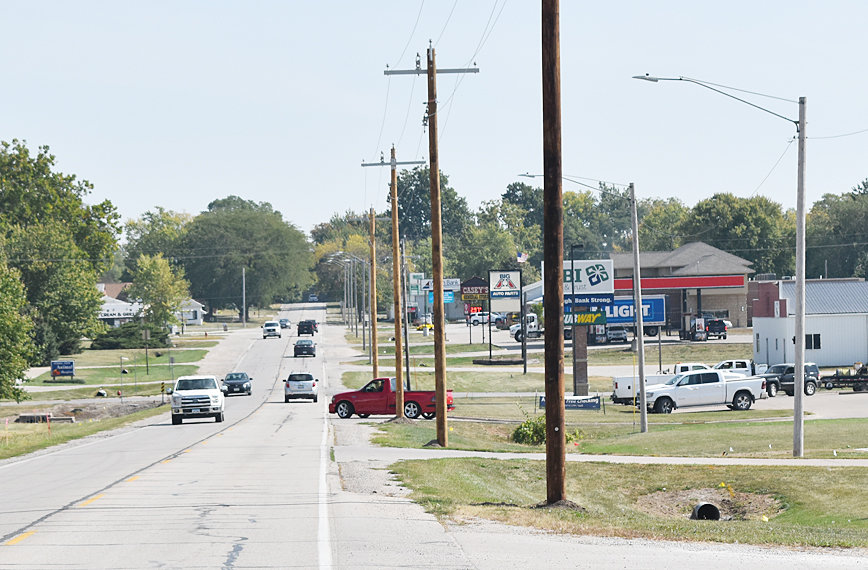 Wilton Mayor Bob Barrett and members of the city council questioned the positioning of new electric poles on Wilton's busiest street — Fifth Street — recently in preparation for a new senior apartment complex being built. The mayor questioned their proximity to the roadway, and asked City Administrator Jeff Horne to look into it.
Derek Sawvell
Posted Wednesday, October 6, 2021 12:01 pm
Derek Sawvell, AN Editor

When I drove past them for the first time, I thought I was seeing things. For anyone traveling through Wilton eastbound on Fifth Street in the area of WTC Communications, the Wilton bus barn, CBI Bank & Trust, and the surrounding area, be sure not to veer off the road, as there is a new set of electrical poles (pictured), located as close to a road as I've ever seen.

I felt it had to be a mistake, or temporary. Nevertheless, I instantly wondered why? Seems I wasn't the only one, as it was a hot-button issue at the Wilton city council meeting Sept. 27. Mayor Bob Barrett and most of the council members were asking some of the same questions rattling around in my head.

It was explained that the poles were there in preparation for the new Woda Cooper Chandler Pointe apartments for seniors being built across the street, according to City Administrator Jeff Horne. He said he was going to talk with officials at Wilton Municipal Light & Power to discuss the placement of the poles so close to the roadway, plus inquire why lines weren't placed underground.

I'll be anxiously awaiting his report back to council. In the meantime, if snow falls, I hope it's not a lot at one time, or our city plows may have some maneuvering to do.

Student photographers come through—Turn to our sports pages (10-12) and you'll see some new bylines this week.

I had to travel out of state at the end of last week, so I reached out to some area students to see if they could help me with photos from Friday night Wilton and Durant football games.

Wilton senior Joann Martin has been as much of a fixture at Beaver ball games this fall as I have. She's the editor of this year's Wilton High School yearbook, and due to not having enough photos for last year's book, she said she's taking the photography into her own hands.

Half the job is being there, and she certainly checks that box. I tasked her with getting me a few photos from Wilton's game at Mediapolis Oct. 1, and she came through.

In Durant, I turned to the Durant Chronicles school paper staff, and adviser Steve Sands. Senior Dayna Maiers also came through, taking some game shots of the Wildcats at West Branch.

My heartfelt thanks go out to those two seniors. You both made me worry less while I was on the road, and you did nice work!

I also had to miss the most highly anticipated volleyball match of the season in the River Valley Conference as Wilton traveled to West Liberty Sept. 30. I was sad to miss it in person, but I was sitting along the Saint Johns River in Jacksonville, Florida watching West Liberty's YouTube channel on my iPhone following along.

This was a statement win the Beavers needed as they make their trek toward another state tournament. I hated to miss it but was there in spirit. See our coverage on page 10.