Was a social media challenge responsible? 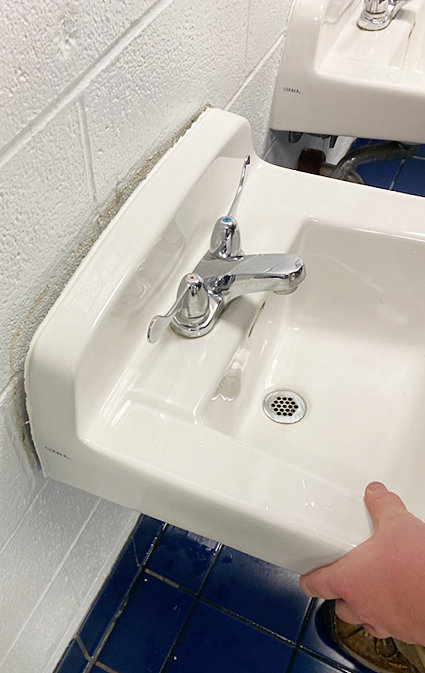 Vandals pulled sinks from the walls, resulting in water pipes leaking underneath.
Contributed 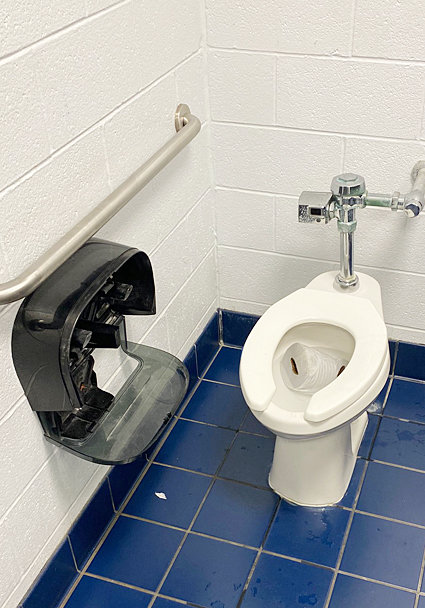 When vandals from Columbus High School struck the Durant men's restroom during a volleyball match Oct. 18, they did a lot of damage in a short time, including breaking toilet paper dispensers and putting the unused rolls in the toilets.
Contributed 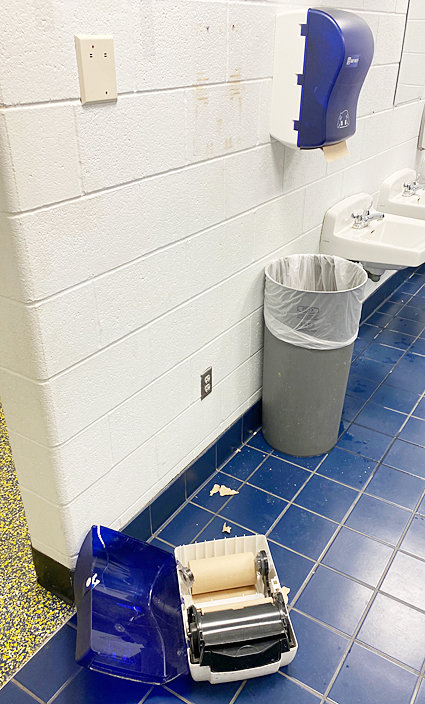 A paper towel dispenser was pulled from the wall and discarded to the floor.
Contributed
Previous Next
Posted Wednesday, October 27, 2021 10:55 am
Derek Sawvell, AN Editor

Could a challenge on a social media app be the catalyst for recent vandalism at Durant High School during the school’s final home volleyball match of the season? According to Activities Director (AD) Matt Straube, there’s too much of a coincidence to ignore.

Yet late in the opening game of the 5-set thriller, Straube could be heard over the school’s PA system asking for a member of the custodial staff to report to the men’s bathroom.

Moments later, sometime around the start of game two, Straube came into the gym and stopped the match, microphone in hand. He announced to the crowd that the boys’ restroom had just been vandalized, and that the district had cameras. His final plea: “Make smart choices.”

In the men’s restroom just off the high school commons and administrative office area, a paper towel dispenser had been pulled from the wall, toilet paper in the stalls had been put in the toilets after the dispensers were broken into, and two of three sinks had been pushed down, coming partially unattached from the wall. Water was leaking underneath.

Straube immediately thought of recent posts on the social media app TikTok that had been getting traction. Trending posts known as “devious licks” began surfacing on Tik Tok in September. (TikTok is a social media app where people make videos set to music.) Several of the “devious licks” ask students to vandalize schools, primarily bathrooms. Straube was aware of the trend, as some Durant students had already been disciplined for acts of vandalism.

There is a monthly list of “devious licks” floating around the Internet. While students may be a bit behind schedule, they all involve acts of inappropriateness or, in the case of the vandalism, breaking the law.

According to Straube, two Durant elementary students reported the vandalism to concession stand personnel moments after it happened. He then contacted both Principal Joel Diederichs and Student Resource Officer Mike Meier of the Durant Police Department.

The next day, Meier reviewed school camera footage. There are no cameras inside bathrooms, but there are cameras in the hallways outside the bathrooms. Footage shows two Columbus high school students rushing from the bathroom in question as the witnesses entered.

Officer Meier knew the police chief in Columbus Junction, and sent pictures of the alleged vandals to Columbus PD. Straube then contacted the Columbus AD, who wanted a list of Columbus High School students who attended the match. Thanks to the state’s new online ticketing system, Straube was able to provide a list. The names matched the two who were on the video.

Criminal charges were in discussion by the schools and police departments as of press time.

Straube said estimates were around $1,000 damage to the bathroom, plus the time to get it back in working order.

Durant and Columbus are not in the same conference, and the schools don’t regularly play volleyball. Straube knew of no “bad blood” between the two schools. Therefore, he likened it to the social media challenge.

“It’s too coincidental that they came and destroyed a bathroom. Maybe it’s kids feeling like they need to destroy a bathroom, I don’t know,” said Straube. “We’ve had some minor incidents of this already … we’ve told kids if they do it (vandalize school property) there’d be consequences.

“With social media there are trends, and people follow the herd. Kids look for ‘likes.’ A lot of it comes down to the fact that they’re in high school, and some make poor decisions. But in this case, it’s not harmless pranks. It’s vandalism, and there are consequences for that kind of behavior.”