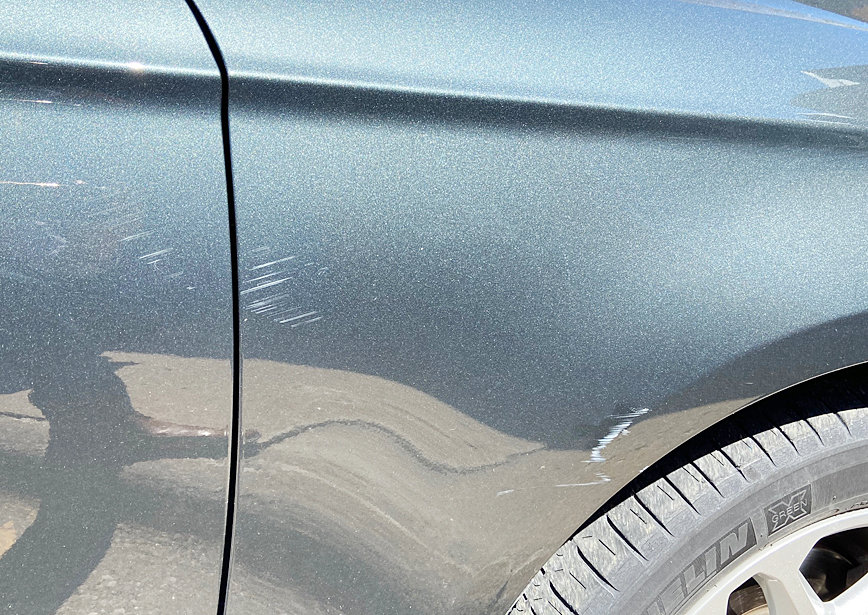 A Ford Fusion is shown above, with damage to the fender sustained while being parked outside the Advocate News office, near the Durant-Wilton Food Pantry.
Derek Sawvell 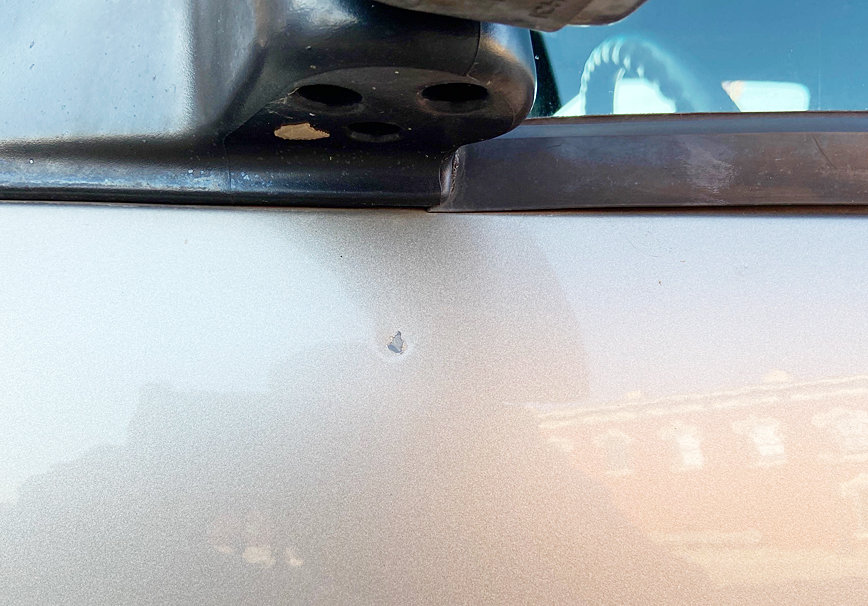 A Chevy S10 belonging to AN Editor Derek Sawvell was damaged below the mirror while parked in the same location.
Derek Sawvell
Previous Next
Posted Wednesday, September 1, 2021 5:51 pm
Derek Sawvell, AN Editor

I wasn’t going to say anything, but once it happened a second time, I felt it was time to speak out.

For the second time since May, I’ve had a car damaged while being parked in downtown Wilton near our Advocate News office. Each time, the vehicles were also parked near the front of the Durant-Wilton Food Pantry.

Before I tell the stories, let me first say that our business works hand-in-hand with the food pantry. We’re constantly taking food there that people drop off to us. We hold our own food drive in order to make donations. We print their forms. We run in-kind ads to promote when it’s open — the first and third Tuesdays of the month.

We know the volunteers who make the food pantry go. They are our neighbors. They are our family (figuratively and literally in some cases).

It started in early May, when we parked our 2015 green Ford Fusion in one of the spaces near the food pantry door. The mistake we made was leaving it there in that space on a Tuesday, only to be parked front and center during “food pantry day.” Upon getting ready to use the car again the next day, I noticed two large scratches/scuffs on the front passenger side fender.

My mind immediately went to the food pantry. It’s a busy place on those Tuesdays. People are filing in and out, and there are goods setting outside in the warmer months around the flower bed in front of the building during open hours.

My best guess is that something, or someone, ran into that fender during that time. There were no dents, just visible scuffs in the paint. If anyone thinks I wouldn’t have noticed it, he or she doesn’t know me. I watch my vehicles closely, checking them daily for unforeseen damage.

I called the police and filed a police report with Wilton Chief Dave Clark. I then contacted one of the stewards of the food pantry to see if he remembered any damage being done. He did not.

My solution — don’t park in front of the food pantry on or around “food pantry day.” That shouldn’t have to be the unwritten rule, but that’s what I started living by.

Fast-forward to Wednesday of last week. I have a used 2003 Chevy S10 pickup, and I used it to make a delivery in Durant during the late morning hours. Upon coming back, I parked it in nearly the same spot near the food pantry.

Big mistake. However, it wasn’t going to be a food pantry day. In fact, food pantry day was the day before. When I left my office at the end of the workday, I noticed a deep gouge all the way through the paint on my driver’s side door, directly underneath the mirror. It looked like someone had taken a screwdriver and pushed it right into the door, going all the way through the paint, making a dent along with it.

There was no commotion related to the food pantry that I saw that day.

Again for clarity, I’m not placing blame. I’m thinking out loud. Why is it that the two times I’ve parked a vehicle in those spaces, damage ensues. What am I missing? Could it be vandals? Could it be someone walking to and from downtown “having some fun” at my expense? We know there is also work being done in the old Star Drug building. Do I have a target on my back via one of my biggest “fans?”

I’m not sure, but enough is enough and it’s time for a change. It shouldn’t be too much to ask to park legally in any spot in downtown Wilton and not expect damage and/or vandalism. In a previous column, I outlined the countless improvements made to our downtown in recent years. It’s the hub of our community. Yet we are a key player and business here too. And often, I’m working at your hometown newspaper late into the night, trying to keep my head above water to get the next edition out to our thousands of readers.

We are also aware that several people living in and around downtown Wilton use parking spaces near our business for their personal vehicles. Several downtown apartments don't offer off-street parking near the apartments themselves, therefore we have some of the same cars using spaces in front of our business that could be utilized by our customers or staff. Also in recent months, the city of Wilton forbid parking on Cedar Street from the alley just north of our business toward Fifth Street. We support this move, yet it has also resulted in more cars parking near our building.

I’m not asking for much, just a little respect. If you’re walking to and from downtown Wilton on Cedar Street, please respect property. If you’re visiting the food pantry, either as a patron or volunteer, please be cognizant of your surroundings.

I’ve learned a painful lesson, and will try to take my vehicles out of the equation. And while I didn’t create a written report the last time, I made the police aware it happened again, asking them to keep an eye on our property and surroundings.

It’s sad I had to do it, but this is where we are. If anyone has any information on what happened to my vehicles or, if it’s happening to others, please come forward. While I know as I type that, my mind tells me, “fat chance!” So instead of thinking I’ll ever find out what happened, I’d simply make a final plea to please respect other people’s property. Thank you.

Why is GOP demonizing teachers as 'sinister' and pushing pedophilia?

Iowa ranked No. 1 for opportunity