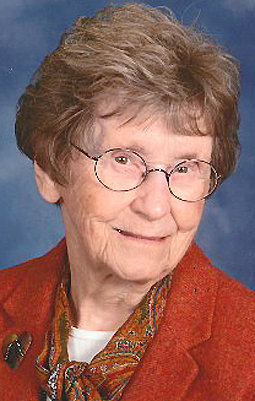 Phyllis Lorraine Null was born April 18, 1928, the daughter of E.B. and Augusta Husmann Null of Monticello, Iowa. She graduated from Monticello High School and later taught for a few years in a one-room schoolhouse in rural Jones County.

On Dec. 29, 1950, she was united in marriage to Robert M. Parrott of Wheaton, lIl. They met on a blind date arranged by one of her high school friends who was dating one of Bob’s fellow students at Cornell College in Mount Vernon. Their marriage lasted 45 and a half years until Bob’s death in 1996. For all but two of those years, they made their home in DeWitt.

Phyllis was a homemaker. She enjoyed entertaining her family and friends, playing cards, her flower gardens, and bicycling trips to Germany, France, England, Russia and around the midwestern and eastern United States. She was an active volunteer, including programs at the DeWitt United Methodist Church and Mobile Meals.

In addition to her husband, she was preceded in death by her parents, one sister, Vera Schoon of Monticello; and two brothers-in-law.

Phyllis deeded her body to the University of Iowa College of Medicine. A memorial service will be held at a later date. Memorials may be made to the DeWitt United Methodist Church, the DeWitt Library, or the DeWitt Referral Center.

The Chambers Funeral Home of Eldridge is in charge of arrangements.