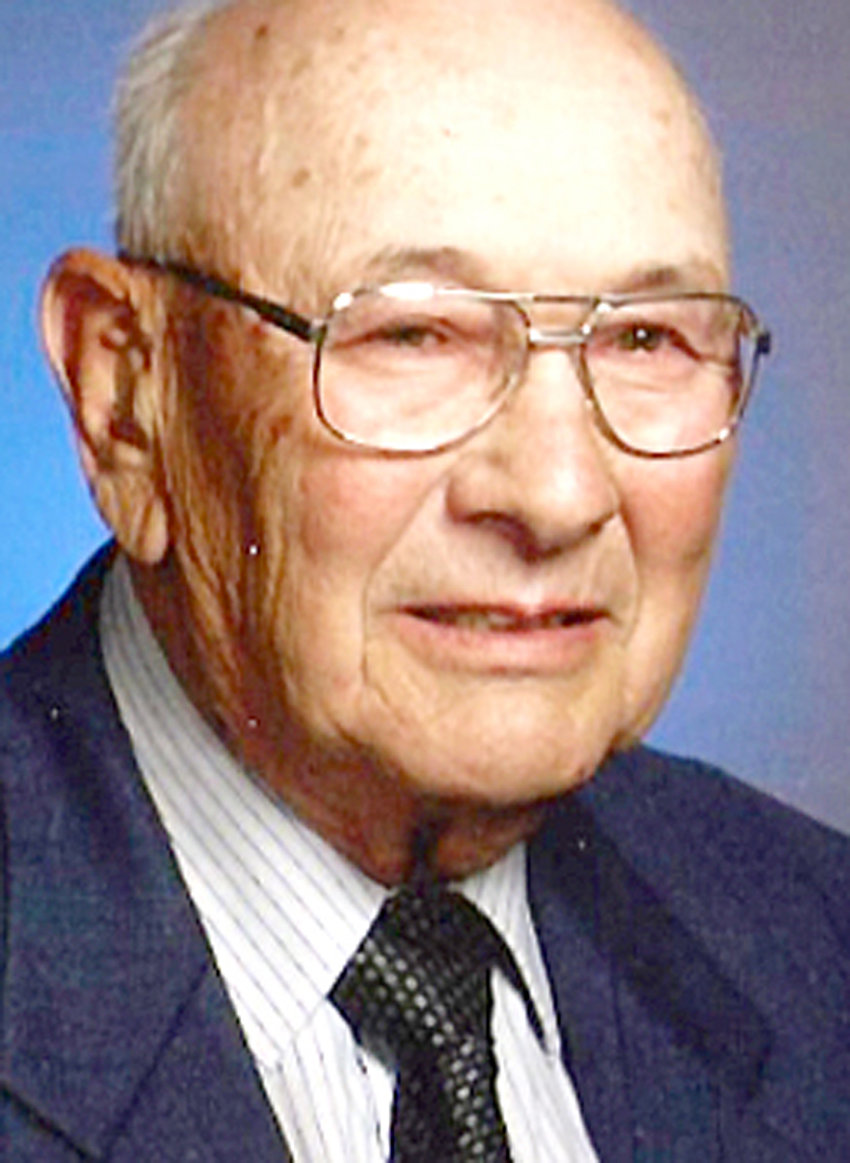 Robert Fred Nowachek, also known as Bob, Poppie, Pops, Old Pop, Indian, Ol’ Bohemian, returned to the hill on Friday, Oct. 8, 2021. This gentle soul witnessed 100 years, seven months, and two days on this earth and had stories that few could tell. First and foremost, a humble farmer, he was also a grand storyteller, horse whisperer, card player, and family man. He lived his life with integrity, honor, and the kind of hard work that is difficult to even comprehend.

He lived simply and loved fiercely. Bob was born on the Nowachek farm between Oxford Junction and Wyoming on March 6, 1921; the only son of Fred Joseph Nowachek and Clara Emma Fritz. Farming was his passion, and at age 13 his dad allowed him to start cultivating field corn with a one-row plow, pulled by two horses; one row up, and one row back. He had a passion for the horses and cared for up to 11 at a time. He managed to feed, curry, harness, and hitch them up to the post, along with slopping hogs, all before it was time to eat breakfast. After a change of clothes, he would attend the rural Schwab School #5, about a mile south of the family farm. He attended the one-room schoolhouse until age 13, then attended high school in Oxford Junction, where he graduated in 1939.

He met the love of his life at a dance hall in Baldwin. They were later engaged at the Jones County Fair in the summer of 1944. Algean Audrey Kuhlman became his wife on Nov. 25 that year and they exchanged vows at the First Lutheran Church in Maquoketa. Back in those days, you were a shoddy farmer if you didn’t have your crops out by Thanksgiving, but they still managed to pick, by hand, the 10 acres still remaining in the field after their union. They would be married for nearly 77 years.

They welcomed Pamela Jean in 1946 and Ronald Fred in 1952. They worked like crazy and saved every penny. In his own words, he could “pick corn like a wild man” and was known to hand-pick 120 bushels before 4 p.m. The work wasn’t complete until you unloaded the wagon, by hand, as they didn’t have an elevator then. Frugal and simple living allowed Bob to buy his first brand new tractor, an IH 450, in 1957. Ronnie was 5 years old when he rode home on that tractor from Soppe’s Implement store in Oxford Junction. They put a lot of miles on that old IH, and one final drive returned Poppie to his eternal resting place at Mayflower Cemetery.

He had a lot of accomplishments throughout his years that stemmed from his passion of the land and pride in farming. Ever modest, and never boastful, we must share a few of them now that the threat of a lickin’ on our “purdell” is not likely. He was most proud of the 200-acre farm that has been in the Nowachek family for 144 years. He was a pivotal member that started the Oxford Livewires 4-H club in 1938 and later served at the county level. 4-H paved the way to sharing his love of beef cattle at county, state, and national fairs. He was a member of the Jones Co. Cattlemen’s Association and in 1999, was inducted into the Jones County Cattlemen Hall of Fame. Raising beef cattle was part of the farm since the time his grandfather Bert purchased the land in 1877. Bob kept the tradition going by farming with his father, Fred, for nine years. Bob and Algean started farming on their own in 1954 and were the epitome of a genuine hard-working American farm family. They moved to town in 1979 and in 2004, Pop said this was “too damn long for a farmer to live in town,” and continued to drive to the farm daily to oversee operations in the fields, pastures, and cattle yards. Over the years he did find time to serve on the Oxford Junction School Board and never missed an Alumni Banquet or Prime Steer Show until the last few years. He had a special fondness for his beloved team of ponies: Snoop and Pocket, and spent hours with the grandchildren tending them, and riding in local parades. Even after he was no longer able to drive, you still saw him at all the local sale barns where he could be amongst the cattle and the camaraderie.

Poppie loved his family, his children and grandchildren, whom he would always say made him extremely proud. He is survived by his wife and favorite dance partner, Algean “Mouse”; daughter Pam (Rob) White of Eldridge; Ron (Carmie) Nowachek on the family farm; six grandchildren; 12 great-grandchildren; and sister Rosalie Westbrook (Denver, Colo.).

Loved ones that cleared the path for Poppie include his parents, and two sisters Anna Marie and LaVerna Mae.

It is not lost on his family that he died during the harvest. The time of year when all your hard work is reaped, recognized, and you’re given the time to rest. Flowers are great, but Poppie would want your earnest money left with  critical pillars of his community. Memorials may be left with St. Mark's Lutheran Church (everyone needs prayers right now), OJ Fire Department (they responded to many catastrophes at the farm over the years), OJ Ambulance Service (thank you for all the urgent and loving care), and the Legionnaire Ballroom (where they enjoyed dancing ‘til their red satin shoes fell off).

Finally, the family is indebted to the incredible staff at Clarence Nursing Home. Each and every one of you cared for him, and continue to care for Gram, as if they were your own family and we are extremely thankful for doing the things that we could not.