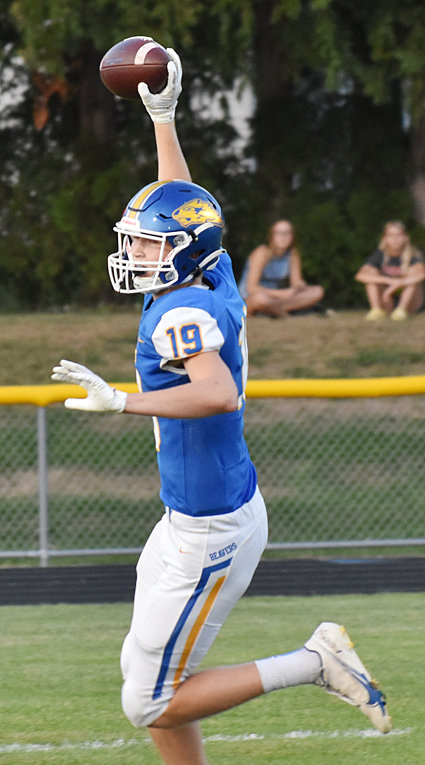 Wilton tight end Caden Kirkman, shown moments after scoring a touchdown for the Beavers Sept. 10, collapsed moments after the annual rivalry game at Durant Sept. 17. He was taken to the hospital and treated for a concussion.
Photo by Derek Sawvell
Posted Wednesday, September 22, 2021 2:58 pm
Derek Sawvell, AN Editor

Sometimes things happen to put things in perspective. Moments after another instant WHS vs. DHS classic, Wilton TE Caden Kirkman collapsed. He was taken away in an ambulance. My thoughts are with that great young man tonight.

It was supposed to be a weekend of reflection on yet another great football game in the Wilton vs. Durant football series. Instead, the large crowd attending the annual Backyard Challenge game in Durant Friday night went from pulses pounding to holding their collective breaths.

Caden Kirkman, Wilton’s 6’8” tight end, exited the Durant field moments after Wilton had come back from two scores down in the second half to win in the game’s final moments 24-22. (For more on the game, turn to page 8.)

He climbed the hill on the Durant side of the field toward the high school parking lot, where his father was standing. While talking with him, Caden suddenly collapsed.

At the time, I was doing postgame interviews with Durant coach Joel Diederichs and Wilton coach Ryan Hetzler. I’ve recorded thousands of hours of tape in my career, but listening to the tape of that night was chilling.

I was first talking with Hetzler. As we were talking about the game, you can hear in the distance one of the Wilton coaches yelling “Hetzler!” Then someone ran down the hill to the fence along the Durant sideline and shouted, “Coach, we’ve got a player down!”

I can hear myself on the tape saying “Oh boy,” and just like that, Hetzler was gone — sprinting off the field to be with his player.

Not knowing yet what was going on, I began interviewing coach Diederichs. We were both pausing at times to try and gauge the situation. All of a sudden, you can hear the sirens of an ambulance on my tape.

That’s when our interview ended, and both Diederichs and I made our way over to the scene.

I climbed the hill to see medical personnel attending to Kirkman, who was on his back on the ground. Someone was holding his legs in the air, and EMTs were asking him questions. His mother and father were close by.

Everyone in attendance who hadn’t yet left the game were frozen in space and time. No one was moving or speaking. You could hear a pin drop.

Members of the Durant and Wilton student sections, who had been at each other’s throats all night with coordinated cheers, were both close by, watching with fear in their eyes.

I’ll admit that with the amount of sports and injuries I’ve witnessed in my career, it takes quite a bit to shake me up. While I wasn’t shaken on the outside, on the inside I was quite worried. With Kirkman’s size, I feared it was something internal with his organs.

The Durant Ambulance crew got him loaded and he was taken to the hospital. Moments later, I was able to talk to some of the trainers on the scene, and asked what they knew. The early thought was a concussion.

Apparently, Kirkman had hit his head on the field during a pass play in the game’s final minutes. On one hand, I was first relieved that it wasn’t something internal. On the other hand, I immediately remembered Kirkman’s bad concussion during basketball season last year. A head injury that had him throwing up off the court after it occurred.

The next day, I shared some messages with his mother Kelly Kirkman, a teacher at Wilton Elementary School. I’m sure she was being bombarded with messages and questions. She took the time to share some messages back and forth with me.

She said it was a long night in the ER, and that a CT scan “was fine, just a major concussion. Lots of rest and recovery.” She also mentioned that Caden didn’t remember playing in the game.

She said the support from both communities was overwhelming. “I love Wilton and Durant,” she said.

I agree. You never want something like that to happen, but it proves what I already knew. These communities don’t just care about their own, they care about each other. Yes the blood boils when the Wildcats and Beavers are on the field competing in these crazy games — but it’s blue and gold blood running through all the veins.

I conversed with Caden as well, and he was short and sweet. “Luckily it was just a concussion. I don’t remember much from the game, and don’t remember anything after, until the hospital. I didn’t stay the whole night, got home around 4 a.m. I will at least be out for a couple of weeks,” he said.