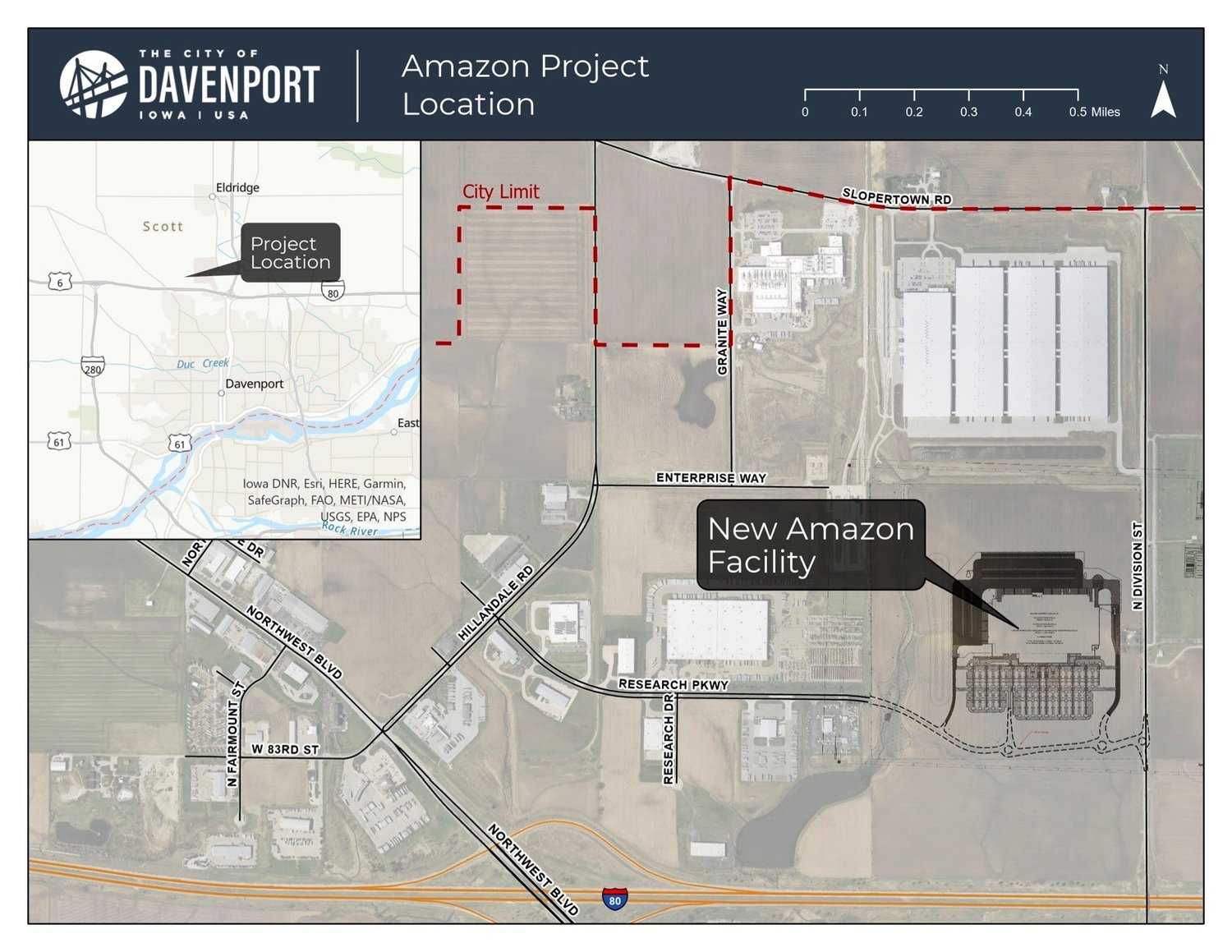 Amazon.com, Inc. announced plans to open its second robotics fulfillment center in the state of Iowa creating 1,000 new full-time jobs that will provide employees with at least $16 per hour and comprehensive benefits.

Amazon announced it will build a 640,000 square-foot robotics fulfillment center in Davenport that will create 1,000 new full-time jobs when operational. The center will be located on 158 acres in the Eastern Iowa Industrial Center along Interstate 80. Crews already are doing site work in preparation of construction to begin later this summer. The site is expected to launch in 2022.

“We are excited to continue our investment in the state of Iowa and look forward to creating 1,000 new, full-time jobs,” said Caitlin Polochak, regional PR manager, Amazon. “The site will help us continue to serve customers with great delivery options. We appreciate the support from state and local leaders who have made Amazon's growth in Iowa possible.”

The project was announced during a news conference with representatives from the City of Davenport, Quad Cities Chamber and Greater Davenport Redevelopment Corporation (GDRC), a non-profit organization that owns the available sites in the Eastern Iowa Industrial Center.

“The City of Davenport is excited to welcome Amazon to the Eastern Iowa Industrial Center,” Davenport Mayor Mike Matson said. “Their investment in our community shows that Davenport is the ideal place for companies to locate and grow businesses. We look forward to this project adding to the vibrancy of our local economy.”

Amazon employees will pick, pack, and ship smaller customer items such as books, toys, electronics and other household items.

“Amazon recently announced pay increases across its fulfillment and transportation networks,” Polochak said. “The open roles we’re hiring for offer an average starting pay of at least $16 per hour, plus sign-on bonuses in most locations of up to $1,000.”

On top of Amazon’s industry-leading minimum starting wage, full-time employees receive comprehensive benefits, including full medical, vision and dental insurance as well as a 401(k) with 50% company match. The health and safety of employees is Amazon’s number one priority—and has been since day one. Amazon works closely with health and safety experts and scientists, conducts thousands of safety inspections each day, and has made hundreds of changes as a result of employee feedback. In addition, Amazon supports employees with paid leave so they can take time off without having to worry about missing a paycheck. The company also offers up to 20 weeks of maternal and parental paid leave and innovative benefits such as Leave Share and Ramp Back, which give new parents flexibility to support their growing families.

Amazon is committed to the long-term development of its employees. The company’s employees have access to innovative programs like Career Choice, where Amazon will pay up to 95 percent of tuition for courses related to in-demand fields, regardless of whether the skills are relevant to a career at Amazon. Since the program’s launch, more than 25,000 employees across the globe have pursued degrees in a range of fields, including game design and visual communications, nursing, IT programming and radiology.

With a 1,000-person workforce, Amazon will become one of the Quad Cities region’s Top 15 employers, in terms of the number of jobs.

How the project developed

The project began when a site selection firm contacted the Quad Cities Chamber in November 2020 seeking sites in the bi-state region for an unnamed client, said Paul Rumler, President & CEO of the Chamber.

“After one of the region’s potential sites was selected, the Chamber connected the project with the appropriate city, state and other resources,” Rumler said. “It takes many partners to assist a project of this magnitude and this is a perfect example of how great collaboration works.”

Rumler said several factors led Amazon to choose the Quad Cities. “They were attracted by the region’s central Midwest location, the easy access to their customers via our interstates, the availability of a large greenfield site ready for immediate construction and access to a laborshed of 743,000 individuals including a pipeline of workers with the skill sets needed for their operation,” he said.

Seefried Industrial Properties, Inc., based in Atlanta, is the project developer. Seefried acquired the land from the GDRC and retained Ryan Companies as the general contractor for the project.

"The board of the Greater Davenport Redevelopment Corporation has known for years that the key to landing a project of this magnitude was contingent on us securing an option to purchase the property from the Shriners Hospitals for Children (Shriners),” said Jason Gordon, GDRC Chair. “I want to thank our board members and our Executive Director Roy Wennlund for keeping this priority at the forefront, and for successfully negotiating with the Shriners."

Gordon applauded Shriners for their support and the extra efforts by their staff and management. “This transaction was a ‘win-win,’ in that, it enables Shriners to further their mission of providing care to sick children while providing GDRC with a property that will be developed by Amazon and provide jobs and economic growth for many years to come,” he said.

The City of Davenport has agreed to upgrade street infrastructure leading to the project site as well as make improvements surrounding the area to accommodate the increase in vehicular and industrial traffic.

To assist with the estimated $3.9 million in road improvements, the City applied to the Iowa Department of Transportation’s Revitalizing Iowa’s Sound Economy (RISE) grant program. Roadway improvements include:

The RISE grant will cover 60% of the cost; the City anticipates using general fund and bonds abated by tax increment financing (TIF) funds to cover its 40% required contribution of approximately $780,000.